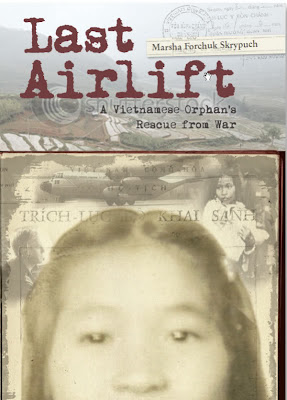 This short narrative reads like a well-written novel, but it's the true story of Tuyet Son Thi Anh, a young girl who endured polio and war, and who was flown out of Saigon in 1975 by Americans, at the end of the Vietnam War.
Tuyet spent most of her early years in a Vietnamese orphange, caring for children younger than she was, and with only vague memories of her mother. After the fall of Saigon, Tuyet and hundreds of other Vietnamese children were airlifted to western countries--and Tuyet found herself in Canada.
Her memories, as told to the author, are fascinating and poignant. Having never seen a bed, a bathtub, or a fork, Tuyet had many adjustments to make. But luckily she was cherished in her new Canadian family, and has been able to survive and thrive.
An author's note at the end of the book tells of now-adult Tuyet's life today.
Highly recommended! 2011.
K. Muhm
Posted by WML Youth Services at 2:45 PM

Thank you for the WONDERFUL review of Last Airlift. This is the first time I have ventured to write narrative non-fiction. My previous books have been historical fiction. I loved the challenge of writing Tuyet's story.